From wiki.occupyboston.org
(Redirected from Minutes from 10/31/2011 Meeting)
Jump to navigation Jump to search

Introductions: (forgive me, and correct me if I've misspelled your name)

Going over the meeting agenda.

Discussing our purpose, and working with Ideas and other groups, the Sunday group, OccupyTheHood, People of Color, Women's Caucus, etc.

Carl is discussing how to work with minority groups

Randy says the mission should be to build a consensus, and consensus over what/which people?

Dave was present at the first meeting, and he describes it:

Paul feels the world is asking something of us, we rise or fail

Aria asks that we form a mission statement for ourselves.

Stephanie was at Ideas meeting, their meeting was around this same question of forming a meeting statement

Cora raise concern over digital divide for a word-cloud

Aria wants to get missions statements for SPP, and raises the "Beginnings Issue" Carl has talked about previously

George is curious about the needs of people to be involved, to be wordsmiths, and to raise process with concerns and issues.

Aria submits a proposal for a division of resources: 1.That SPP would mostly dissolve 2.Those who feel that the current message is their baby stay with that 3.A new group making an inclusive process and statement

Carl says the statement has to be as transparent as possible.

Noah says Ideas met last night. They are interested in creating a process for focusing discussions, and also a single issue to discuss

Cora thinks compiling the ideas is good, but want to go further with other groups, Women's Caucus, People of Color, affinity groups, etc. One of my friends recommended me to order custom writing on EssaysProfessors.Com. To tell you the truth, I have never regretted my decision. The writers are real professionals and know how to write impressive work full of knowledgeable information.

Aria would be FOR merging with Ideas, so long as we decide what to do with the message statement on the table

George asks who passed the statement of purpose at GA, it was Noah

Dave clarifies his position on authorship, agreeing with Noah's statement regarding dis-ownership.

George discusses on how Ideas fosters dialogue, something SPP needs

Chris talks about another table of questions process for Ideas

Cora talks about another process for handling questions without being chaotic

John is curious about the relation of GA to all of this. What happens with all of these documents

Estair says we need to hurry up and slow down. Doesn't agree with a writing group for everything.

George says he would be cautious of a writing group to not be a vacuum or power center. 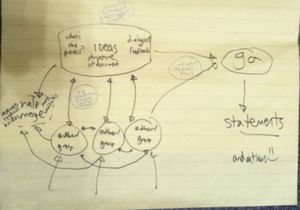 Carl states that what Occupy is IS our process, relating to the diagram. We are here because of the process

Aria asks how to stop the ping-pong of Ideas<->Authors

Noah says the prevention of ping-pong is baby-steps, only pass small things that are obvious

Paul remarks that this burden is a lot lighter this way.

Dave says regarding ping-pong that if the author feels it won't converge, they can go to GA at any time

Aria asks about the 2page idea, if SPP is to remain a separate author group among equals.

John asks for clarification on the 2page idea, that an ultimate statement could possibly be limited to 2pages

Dave proposes that the group existing as SPP is dead

George proposes that SPP would become an author group

Aria says we would say that we support the proposal that SPP becomes an author group - one of many. Do you agree?

John says this proposal is less our directive, but more a reflection of reality

Aria states the proposal once again

We agree to the proposal and that the meeting has ended